... still playing with this Lego

It has become time (for me) to explore OpenShift. OpenShift is a Build and Deployment block using Kubernetes and Docker as deployment target. In other words: It connects GitHub and DockerHub to your cloud provider. It allows you to do do on-premise deployment and to monitor and operate your cloud. In this blog I'll run it (my own little cloud) locally on Windows.

There are four good reasons seen with my dev glasses on:

Of course there'll be pros and cons depending on your taste and on other requirement, but OpenShift is a great option.

So how to get started with OpenShift?

Which editions (products) are awailbale?

Currently (spring 2018) you get a good helicopter view from the free eBook Deploying to OpenShift - Preface - Online Resources.
From there you'll learn that there are two editions (called products) of OpenShift:

On the OpenShift documentation homepage, you'll learn that there are also two more editions (products):

The latter two editions seems to be clouds hosted by RedHat.

OpenShift is a managed PaaS, that must be deployed to some IaaS explained here - Quote:

I think this IaaS stack often will be RedHat OpenStack and probably also is it, when you are using RedHat Enterprise Linux as the container host.

How do I start playing with the toy?

You can locally play with either OpenShift Origin or OpenShift Container Platform.

With OpenShift Origin you have 5 options:

*1: MiniShift is a newer method for local development than the method used in eBook OpenShift for Developers called Vagrant all-in-one virtual machine.
In eBook DevOps with OpenShift a local all-in-one cluster is started using oc cluster up.

In the table below there are some links provided by OpenShift:

So there are lots of options to play with it locally. I'll use MiniShift, which seems to be the simplest option.

What is in the box?

Fig 1. When you run the box there will be a REST API enabling you to manage the box (Drawing by James Bucket hosted by levvel.io) 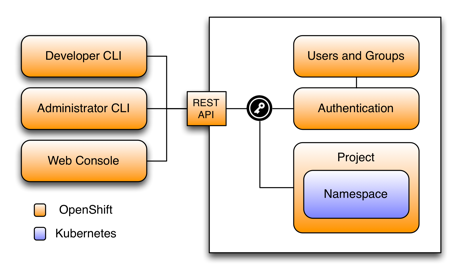 Fig 2. Your code (in docker containers) will be deployed to Kubernetes Pods inside the box (Drawing by James Bucket hosted by levvel.io) 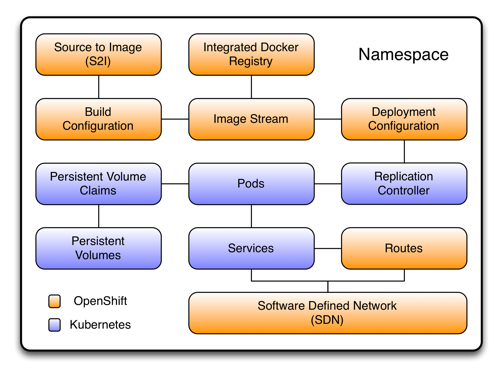 If you compare Fig 2. to a deployment in GCP without OpenShift, then you'll notice that OpenShift takes all the pieces and put them into one box.
So if you build your OpenShift environment (including DBs and other microservices) with Ansible, then you can deploy it to any cloud provider - you environment is now 100% portable.
Fig 3. Continuous Deployment to Kubernetes Engine using Jenkins (Drawing hosted by google.com) I am installing on Windows 10.
Openshift needs a hypervisor. There are two options: Hyper-v or VirtualBox.
VirtualBox is the easy one to handle is my experince. It is also an option that can be chosen both on Windows, Linux and Mac.
I have used hypervisors some years ago on my local PC, so I know that I have already enabled Intel Virtualization Technology (also known as Intel VT) in the Bios. It was required for Hyper-v, so I assume it is either beneficial or required for VirtualBox, too.
Notice: Not all PC's comes with Intel VT.

When you have downloaded VirtualBox and start to install it you are told that it will disconnect your network (why did I also just start a long running upload? - I'll abort that for a while)
Fig 5. Your network will disconnect 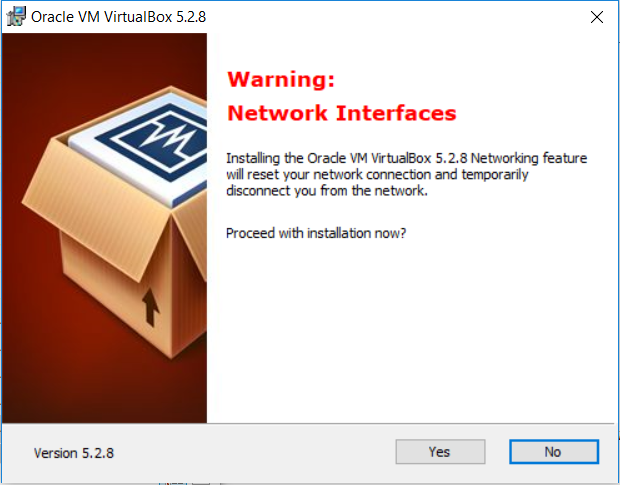 After restart I had an extra network adapter

I downloaded and unzipped minishift/minishift for Windows.
It could be unzipped to anywhere. I chose C:\Program Files\, so after unzip the MiniShift path was C:\Program Files\minishift-1.15.1-windows-amd64. That path had to be added to the environment %path%.

If your screen looks like above the downloded minishift image wil be cached to
c:\users\youruserid\.minishift\cache\iso\b2d\v1.2.0\ 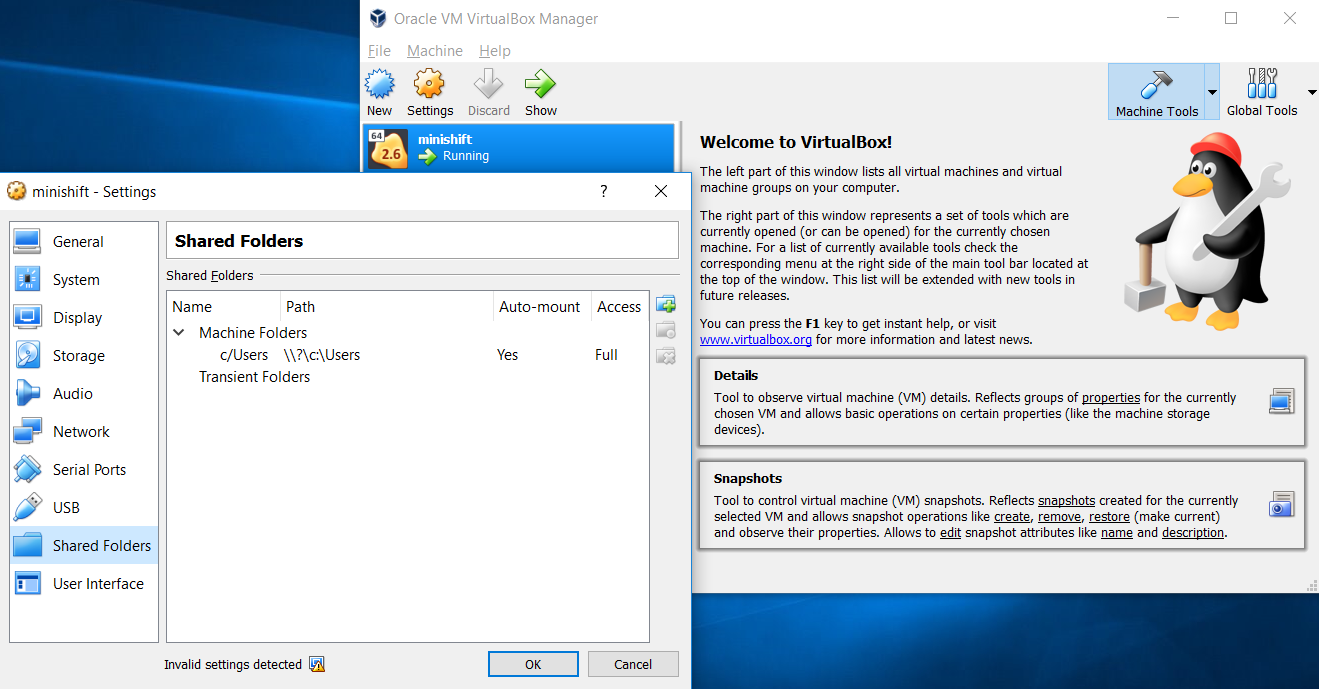 If you have trouble consult Minishift Quickstart and Troubleshooting Minishift. 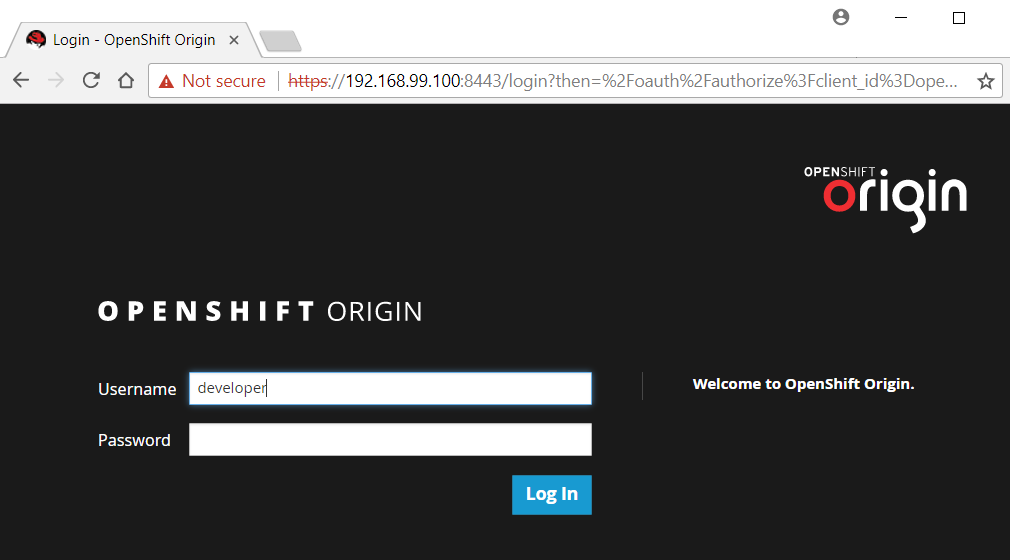 OK, we're in. How about turning off?

You could accidently power off the VM. No worries - you can just start from scratch with minishift start ... - as before. But MiniShift has a corresponding command for stopping:

Did you notice during stop - the image is a boot2docker - which apparently is what b2d is short for. On their githup page they recommend that on Windows one should rather use Docker For Windows. I wonder if that will be the default image, if you choose hyper-v as hyperviser...

In Fig 1. you saw three clients for MiniShift: Dev CLI, Adm CLI and Web Console.
I think the Dev and Adm CLI is one and same - just having different roles using it. At least I know that for CLI we have the oc command.
But where is it?

If you save (or download) the following to C:\Program Files\minishift-1.15.1-windows-amd64\shiftcli.sh, then you can start your minishift from Git Bash with shiftcli.sh

Next: Deploying to MiniShift
... to be continued in Part 2